4 ways you might be displaying hidden bias in everyday life

Home/Education, General, Resources/4 ways you might be displaying hidden bias in everyday life

4 ways you might be displaying hidden bias in everyday life

(CNN) It’s no secret that unconscious biases penetrate various realms of society, from hiring decisions to medical care and even foul calls in the NBA.

But what about implicit bias our everyday lives? Does it play a role in the neighborhoods we choose to live in, the establishments we patronize, the shows we watch?

Implicit bias refers to attitudes or stereotypes that affect our understanding, actions and decisions in an unconscious manner, according to the Kirwan Institute for the Study of Race and Ethnicity, which publishes an annual Implicit Bias Review. It’s different from suppressed thoughts we might conceal to keep the peace; it’s the opposite of explicit bias, which refers to attitudes or beliefs that we fully admit to.

Recent claims of overt and covert discrimination on college campuses and in policing raise the question: How does someone’s unconscious reaction to people of a different race, religion or sexuality influence their judgment and behavior? When CNN asked psychologists and social scientists to explain how implicit bias manifests in everyday life, many were reluctant to commit to an answer, because it’s hard to rule out alternative explanations.

In other words, it can happen, but it’s hard to prove.

“Some biases seem obviously wrong, like treating (equally quali fied) people differently in hirings or promotions,” said Calvin Lai, director of research for Harvard’s Project Implicit. “Everyday biases are hard to wrap our heads around because they’re so much more personal, and you can point to other reasons.”

Structural factors beyond your control might come into play. If most of your friends look like you, or you tend to date people of the same race as you, it could be a reflection of demographics in your community.

When you think backwards, what you think is normal is really cultural pressure that pushes you into bias, implicit and conscious.

But neighborhoods, schools and cities don’t pop up overnight. They take years to form, influenced by social, political and cultural forces. Experts say America is still struggling to reverse the legacy of institutional racism that has left many communities segregated today, creating the pool from which we form relationships and social circles.

Research shows those relationships — along with the interactions and experiences that come from them — influence hidden biases. They can start forming in children as young as six years old and are reinforced in adulthood through social settings and mass media.

“When you think backwards, what you think is normal is really cultural pressure that pushes you into bias, implicit and conscious,” said sociologist Charles Gallagher, chairman of the Department of Sociology and Criminal Justice at LaSalle University in Philadelphia.

The good news? We’re not helpless to combat implicit bias. It can be mitigated through intervention strategies, starting with recognizing where it might exist in your life and seeking exposure to peopleand experiences beyond your regular circles.

Here are some questions to think about:

1. Who are your three best friends?

Picture your three BFFs, excluding your romantic partner. Chances are, they’re the same race as you, according to various surveys. In fact, a CNN/Kaiser Foundation poll released this week found that despite the millennial reputation for inclusiveness, young white Americans don’t have especially multicultural friend groups.

Younger whites are almost twice as likely as Hispanics and blacks to say they socialize mostly within their own race (68% of whites age 18-34 say they overwhelmingly associate with other whites, compared with 37% of Hispanics and 36% of blacks of the same age); the gap is just as wide on where young whites choose to live.

Hanging out with friends that look like you isn’t necessarily a bad thing, especially if they’re nice people. But research suggests that implicit biases and stereotypes — positive and negative — are maintained through persistent lack of contact with others beyond your “ingroup,” the term psychologists use to describe people who share certain characteristics.

It’s not a bad thing to expand your horizons, either. If your friends who look like you are from school or your neighborhood, did you ever wonder how those environments became so homogenized to begin with?

Even if someone is open-minded and willing to have friends across the color line, “those relationships will never have a chance to form” due to high levels of racial residential segregation, which lead to segregated social spaces, he said. 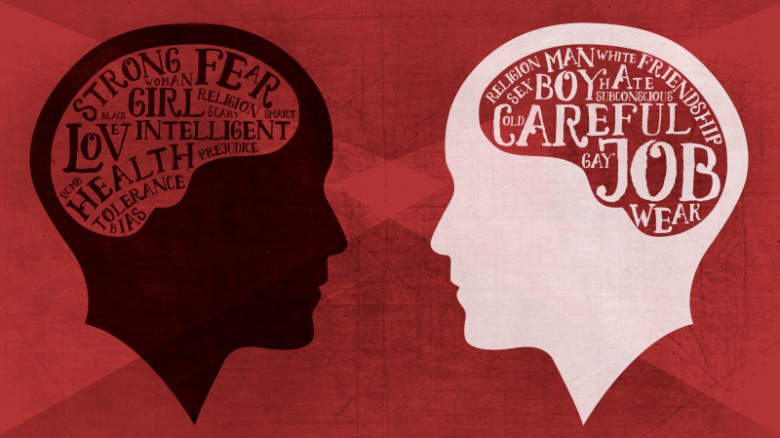 2. Do you automatically exclude certain neighborhoods as places you might live or send your kids to school?

If you are looking to buy or rent in a certain neighborhood, is there a point at which you think “there are too many people unlike me in this community, and I’m looking elsewhere”?

If so, you’re not the only one with a tipping point.

One longstanding explanation for the prevalence and persistence of racial segregation is that white families are unwilling to live in neighborhoods, or send their children to schools, with large minority shares. A landmark study published in 1971 by economist Thomas Schelling demonstrated that once the minority share reaches a “tipping point,” the whites leave.

A 2006 study (PDF) bolstered the findings by ruling out other factors such as income stratification, putting the tipping point around 13% for neighborhoods and schools. The study, “Tipping and the Dynamics of Segregation in Neighborhoods and Schools,” related the location of estimated tipping points in different cities to measures of racial attitudes of whites, based on questions including, “do you think there should be laws against marriages between blacks and whites?”

In doing so, they found that cities with more racially tolerant whites have higher tipping points.

In 2013, about 12% of new marriages in the U.S. were between spouses of different races, according to a Pew Research analysis of American Community Survey data.

Or, maybe it “just happened,” and you fell in love.

The pool you were selecting from was already chosen for you.

Depending on the circumstances under which you met, there’s a good chance “the pool you were selecting from was already chosen for you,” Gallagher said. See above for how that pool might have formed.

A master status is when one part of a person’s social identity, such as being black, disabled, gay or Muslim, becomes the central and most important aspect of who that person is.

“This is typically a label conferred on an individual, and it becomes subconsciously linked to the person by those around him or her,” Gallagher said.

It’s hard to say whether it’s linked to hidden bias, especially since labeling someone might be a conscious, well-meaning effort to identify that person from others with their most distinctive quality.

But consider the reverse: How often do you refer to someone as your “straight white friend”?

These are just four ways we might manifest unconscious bias every day. Those who study implicit bias are working to gather more data with a goal of making people more aware of their unconscious decision-making and its consequences.

Harvard’s Project Implicit features a battery of “implicit association tests” where participants can measure levels of implicit bias around certain topics based on the strength of associations between concepts and evaluations.

“The goal of the organization is to educate the public about hidden biases and to provide a ‘virtual laboratory’ for collecting data on the Internet.”

If you’re interested in measuring your levels of implicit bias (almost everyone displays bias in some way, according to the experts!), here are a few tests you can take:

The CNN/Kaiser Family Foundation poll was conducted August 25-October 3 among a random national sample of 1,951 adults, including 501 black and 500 Hispanic respondents. Results for all groups have been adjusted to reflect their actual national distribution. Interviews were conducted on conventional telephones and cellphones, in English and Spanish, by SSRS of Media, Pennsylvania.